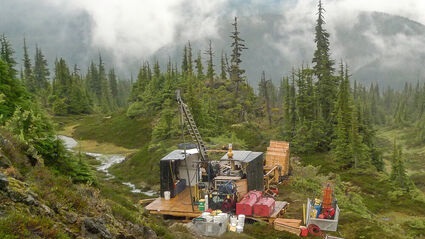 After announcing a C$5.3M investment at February 23, 2022 at a share price of C$0.59 in Dolly Varden Silver (DV.V)(DOLLF.US), maintaining their equity interest at 10.25%, Hecla Mining (HL.US) decided to invest further in the company, as part of a larger round led by Eventus Capital and Research Capital, which also saw other existing shareholder Eric Sprott participating again. Total proceeds accounted for C$13M, bringing the treasury to an impressive C$26M, providing Dolly Varden with sufficient funds to do lots of exploration over the next two years.

Dolly Varden Silver doesn’t seem to be distracted or cautious the least bit in a time where inflation is approaching double digits, and Russia ran into unexpected resistance from both spirited military and civilian Ukraïne fighters and the Western Hemisphere imposing unprecedented sanctions, effectively crippling Putin’s nation. It seems the stockmarkets are already pricing in some kind of solution and are cautiously finding the way up again, as Russia seems to abandon Kiev as a main target and instead seems to concentrate on harbor cities and the eastern regions, alongside peace talks in Turkey being on its way, although without many tangible results so far.

The economic sanctions are much more impactful for Russia compared to the countries imposing them, but Russia has one important subject it can use for leverage: commodities. It is an important supplier of for example oil, gas, coal, wheat, sunflower oil, iron, nickel, cobalt, vanadium, platinum and fertilizers, and affected supply chains are already resulting in high prices across the board, exacerbating already high inflation. The Ukraïne is a very large exporter of for example wheat itself, but their export isn’t hampered by sanctions of course, but by the war itself, where Russians consciously target huge wheat deposits, shipping transports, but also machinery, needed for preparation of large scale wheat growth.

Against this backdrop far from home, Dolly Varden Silver is looking to develop the full potential of the combined Dolly Varden-Homestake Ridge projects, which is called the Kitsault Valley project now after the recent closing of the transaction. Management was in no direct need of raising funds, but was approached by the likes of Hecla, and fellow shareholders Eric Sprott and Jeff Zicherman (Eventus Capital) to do another round.

On March 7, 2022, Dolly Varden Silver announced their best efforts brokered private placement for C$10M @ C$1.02 Flow Through (FT) shares, lead by Research Capital and Eventus Capital, on behalf of a syndicate of agents including Haywood and Gravitas. Since the over-allotment option for the agents of 15% was fully exercised, the company eventually issued 11,274,400 FT shares without warrants, for gross proceeds of approximately C$11.5M. A big participant was Eric Sprott, and according to management there was a higher level of institutional participation on this round. Hecla Mining acquired C$1.5M in common shares separately from the private placement.

Eric Sprott, through his well-known vehicle 2176423 Ontario Ltd., acquired 3,448,200 FT Shares for total consideration of C$2,5M. After closing of the offering, Mr. Sprott now beneficially owns or controls 25,6M common shares and 1,25M warrants, representing approximately 11.1% (was 10.2%) on a non-diluted basis and 11.6% (was 10.7%) on a fully diluted basis. These shares were acquired by Mr. Sprott for investment purposes, as he has a long-term view of the investment.

Hecla Mining exercised its anti-dilution right to acquire 1,74M common shares of Dolly Varden at a price per common Share of C$0.86 for gross proceeds of C$1,5M.  Hecla has also exercised its anti-dilution right with respect to the previously announced issuance of shares to Haywood completed on March 11, 2022, to acquire 46,027 additional common shares at a price of C$0.5896, being the issuance price of shares issued to Haywood, for additional proceeds of C$27,137.  The shares issued to Hecla are in addition to those issued as part of the private placement.

The FT shares of the private placement, and shares issued to Hecla, are subject to a 4 month holding period in Canada expiring on August 1, 2022. In connection with the FT PP, the agents received an aggregate cash fee of up to 6.0% of the gross proceeds, including the exercising of the over-allotment option.

The proceeds of the PP will be used for further exploration, mineral resource expansion and drilling involving the Kitsault Valley project located in northwestern British Columbia, Canada, and the Hecla proceeds will be used for general working capital. 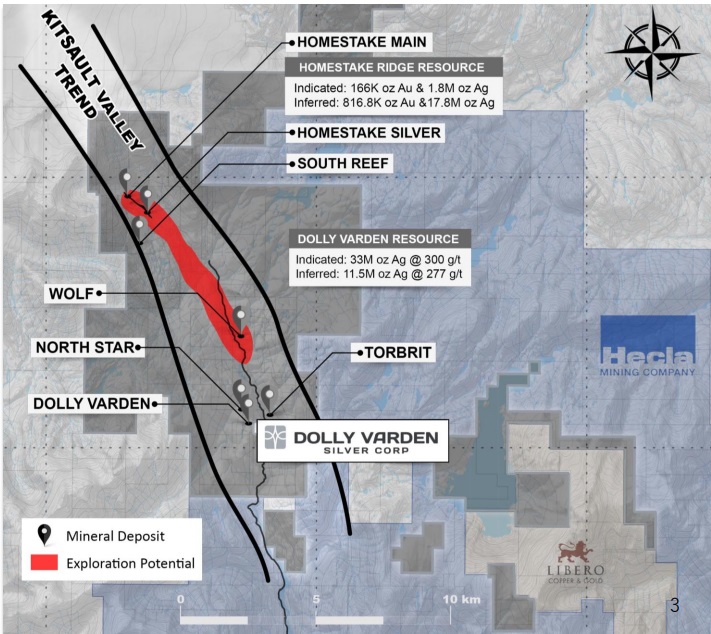 The Kitsault Valley project is already of considerable size, containing 64Moz Ag and almost 1Moz Au in the Indicated and Inferred categories, but management is looking to expand this meaningfully. As a reminder, I estimated an after-tax NPV5 of US$300M (C$380M) in an earlier article for these combined resources at US$1620/oz gold and US$14.40/oz silver. At current precious metals prices this could even increase to an estimated C$700M.

With regards to the current market cap of about C$178M at a share price of 82c, advancing and expanding the project will only add value here, and should increase chances of share price appreciation. It is hard to say what upside potential should be, as an economic precious metals PEA NPV is valued by market cap anywhere between 10-40%. An important rule of thumb is a project going into production, which globally speaking usually trades on average at 100% of NPV, meaning it has a P/NAV of 1. Of course you need to take into account capex funding here, usually with a 65-35% debt/equity package causing additional dilution. Most leverage will probably come from a rising silver price, as this metal still sits at relative lows. 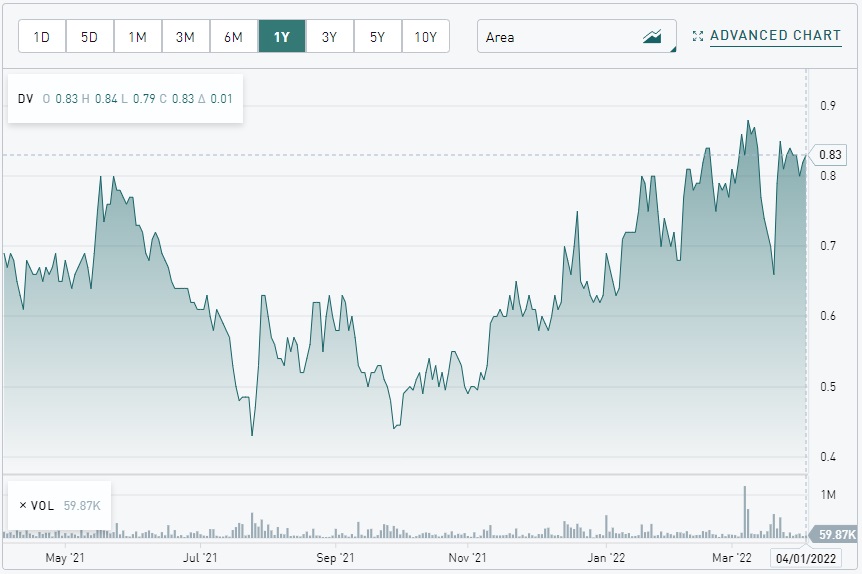 The markets have recovered nicely from the mid-March Russia-Ukraïne conflict correction, and seem to wait a bit before further rate hikes are contemplated by the Fed, and see the ramifications by supply chain disruptions all over the globe.

Now the financing has closed, Dolly Varden is looking into finalizing their new exploration programs. According to management, current exploration plans are outlining 10,000m of drilling at the Torbrit deposit, alone with closer spaced drilling within the current block model as well as step outs alone areas where the deposit is still open. The Homestake Ridge target will also see approximately 20,000m of drilling, targeted at upgrading the Inferred resources in areas where the current model shows the thickest and highest grades. Once higher grade ore shoots are defined the down plunge extention can then be tested for continuity to depth. 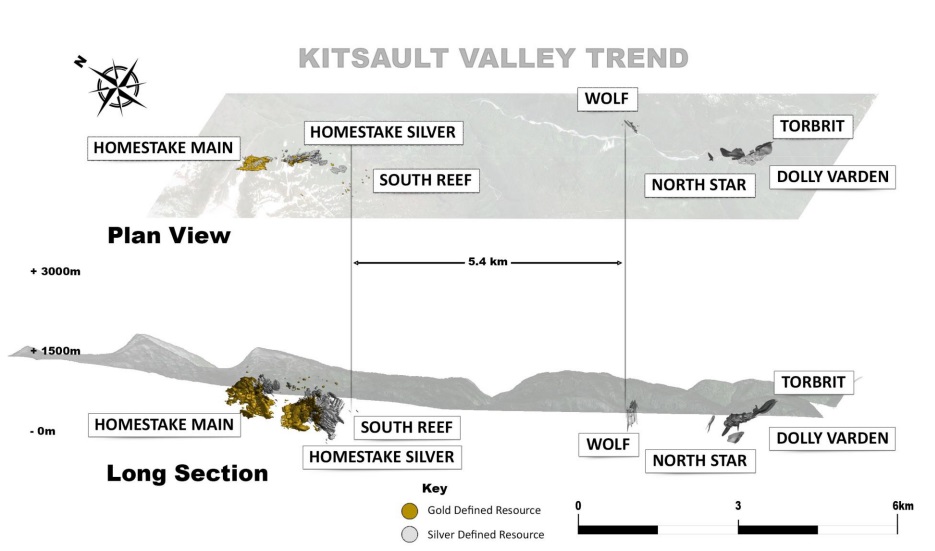 Homestake Silver has seen relatively little drilling and a focus at keeping the silver to gold ratio high will be to expand Homestake Silver. The exploration portion of the upcoming drilling will test several geophysical anomalies modelled along the 5.4km trend between South Reef and Wolf, reinforced by the findings of recent drilling, like the strong potassic alteration associated with silver mineralization which continues beneath the sediment overburden. Current budgets for this work are estimated in the range of C$15-20M and may extend late into the fall of 2022. The upcoming programs for Torbrit and Homestake will start around mid-May. An updated Mineral Resource estimate for the combined project is planned for Q2 of 2023, and will be used in a consolidated PEA for the Kitsault Valley project, which is scheduled for Q4 of 2023.

It is always good to see a company raising at a relatively high share price, as Dolly Varden just received C$13M from esteemed backers like Eric Sprott, Jeff Zicherman and Hecla Mining, most of it at a healthy FT premium per share. The company is planning exploration programs for the combined Kitsault Valley project, which are likely to commence in May. It will be very interesting to see if the 2022 programs could potentially connect mineralized trends between the Homestake and Dolly Varden/Torbrit deposits, growing the individual deposits and finding new deposits. Furthermore I view the consolidated Kitsault Valley PEA, although this will take a while, as an important benchmark for indicating the consolidated project economics. The value of the project seems to have a good chance on improving beforehand, through exploration potential, and leverage to precious metal prices.

I hope you will find this article interesting and useful, and will have further interest in my upcoming articles on mining. To never miss a thing, please subscribe to my free newsletter at www.criticalinvestor.eu, in order to get an email notice of my new articles soon after they are published.

The author is not a registered investment advisor, and currently has a position in this stock. Dolly Varden Silver is a sponsoring company. All facts are to be checked by the reader. For more information go to www.dollyvardensilver.com and read the company’s profile and official documents on www.sedar.com, also for important risk disclosures. This article is provided for information purposes only, and is not intended to be investment advice of any kind, and all readers are encouraged to do their own due diligence, and talk to their own licensed investment advisors prior to making any investment decisions.