Doug Beattie: My Takeaways From The Last Uranium Boom - Part 1

This is an article written by Doug Beattie, written and published elsewhere on January 30, 2019. He was so generous to let me republish this article and others on my new website under construction, uraniumstocks.com (still a work in progress as it seems impossible to find a free data feed for the uranium stock table), and now I decided to publish it here as well as I find his knowledge and experience impressive, under the condition that I would make several things clear for readers before they continue with the article:

Doug Beattie is a retired Chief Mine Engineer of Cameco, one of the largest uranium producers in the world, and is knowledgeable on uranium mines and mining. He also spent approximately eight of his 30+ years in the mining business working as an engineer at zinc mines including Noranda’s Geco copper/zinc/silver mine in northern Ontario, and Glencore’s George Fisher and McArthur River zinc/lead/silver mines in northern Australia.  Doug Beattie graduated in mining engineering at Queen’s University.

After working as a mining engineer in Saskatchewan, Ontario and Australia, he joined Cameco Corporation in 1993 as Senior Mining Engineer at the McArthur River exploration project. He later became Engineering Superintendent during the construction phase, and Mine Superintendent during the ramp-up to full production. In 2002 he became the Corporate Chief Mine Engineer at Cameco’s head office where he was largely involved in uranium project assessments and studies. He then consulted on a number of projects in Canada and Europe before full retirement in 2015.

This sums up the biography of Doug, his article is next, enjoy:

I read somewhere that between 400 and 500 uranium companies sprung up out of the woodwork during the ramp up in spot uranium prices in the mid-2000’s.  The vast majority of these firms were explorers who would hope to gain from the ability to raise funds in the stock markets easily.  Uranium was the flavor of the month, or in this case a couple years, similar to lithium and cobalt recently.  You can see the reason why in the graph below, created by UxC. 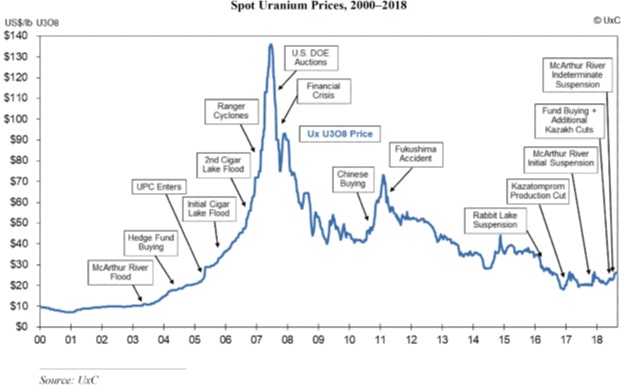 I have all the time in the world for explorers (though I seldom buy their stock).  The mining industry would be no where today without them.   Many of these companies, however, had projects that were well fleshed out during previous rounds of exploration.  Much of this exploration took place during the Cold War when a commercial uranium market did not exist.  In this case, mines operated on more or less a cost-plus basis.  In other words, the miners were guaranteed a profit.  This is how a large portion of previous US uranium production operated for instance which, as a by-product, has led to a very good understanding of what remains in the ground there today.  The US government in fact operated a number of uranium mills during the Cold War.

The problem many of the advanced projects had in the mid-2000’s was a lack of potential buyers for their project.  Almost all of these companies had no intention of ever building and operating a uranium mine.  There were very honorable exceptions including Paladin Resources and Ur-Energy to name a couple.  I tip my hat to these guys.  Many projects had advanced to the pre-feasibility study or feasibility study phase.  But without a potential buyer (there was quite a beauty contest being run by multiple companies at that time), the owners had no way to monetize their holdings.   Enter Areva and the aggregators.

During the mid-2000’s I spent about 50% of my time working with Cameco’s project development team at head office.  I was the token mining engineer there and would provide numerous (countless actually) scoping level type reports on the potential of uranium deposits around the world and had the privilege of visiting many.  The young MBA's on the team crunched the numbers.  (As mentioned in the past, I was also doing a similar effort at that time for the IAEA

pages 131-164 . FYI- when I retired, I pitched out my extensive library, so don’t ask me about a deposit near Dogs Breath, Wyoming.)

The fundamental problem with the steep run-up in the spot uranium price in the mid-2000’s was that it was largely driven to those heights by hedge fund speculation, not utility supply/consumption fundamentals.   Utilities appeared to have panicked in the face of this and over contracted in the term market.  They brought forward demand.  I imagine a hedge fund manager could pay themselves a nice annual bonus based on the increase in the book value of their uranium inventory but there comes a time where they have to monetize this uranium by selling it to a utility or other trader and this is when the rubber truly hit the road, particularly in light of the financial crisis that then occurred.  Goldman Sachs for instance probably took a hit in the hundreds of millions disposing of their uranium.

It should be noted that numerous commodities were ramping up in price prior to the financial crisis.  Uranium is somewhat of a special case though since its lack of liquidity was ripe for exploitation by hedge funds.  I see a handful are making similar type noises today.

The frenzy in the stock market therefore was being driven in large part by hedge fund speculation in the uranium spot market.   Companies such as Cameco were looked upon as a bunch of prima donna's since we had already forward sold our uranium for a fraction of the current spot price.

Analysts/journalists/investors did not, and probably still do not, understand the subtleties of the uranium markets.  Utilities source most of their uranium in the term market whereas the spot market is largely the playground for the traders and opportunists.  The press we received was not pretty and here is some of it….

To get an understanding of the sort of beating Cameco was taking publicly at the time, the difference between spot and long term pricing is illustrated here…. 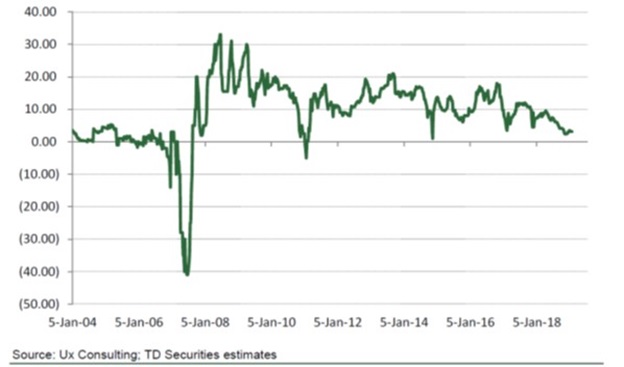 The boom in uranium stocks was aided and abetted by the likes of Energy Metals, Uranium One and Areva.  The key difference between Cameco’s actions and those mentioned above was the perception of what the long-term uranium price was going forward.

The role Energy Metals and Uranium One played in the boom is that they acted as uranium property aggregators.  I believe the term Wall Street uses is that they were “roll up companies”.  They used their stock as a currency to acquire numerous properties.  Energy Metals listed 33 separate uranium properties in their last quarterly report prior to being folded into Uranium One.  A roll up company being rolled up themselves.

So here's the punchline and takeaway from Part 1:

Imagine the relief the owners of a truly piece of shit uranium property felt when along comes one of these roll up companies offering a premium in shares, and the necessary stock market liquidity, to dispose of their already severely over valued (likely Cold War-era) garbage onto unsophisticated retail investors.  That is how many managed to monetize their property.

And while all this is going on, the sell side analysts at the brokerages are just egging it on daily with glowing reports.

Areva’s motivation in this process appeared to me, to not get in the situation that Westinghouse found themselves in in the 1970’s.  Areva was actively trying to sell nuclear reactors to various entities around the world.  My understanding was that they were guaranteeing the supply of nuclear fuel to these reactors for their working life as part of the sales pitch.

The problem is, Westinghouse made the same promise in the 1970’s but did not have the uranium in the ground to mine and deliver.  When the price of uranium rose to $41/lb. in the late 1970’s the 72 Mlb. of U3O8 Westinghouse had promised to deliver for $10/lb. almost led to their bankruptcy.

So, in my mind, this was why Areva went on an acquisition spree during the mid-2000’s boom.  They wanted to ensure they had the pounds in the ground to deliver on their reactor sales projections.  As you will see, this all ended in massive tears and contributed to their eventual bankruptcy.  Ah, the irony.

Meanwhile, those of us at Cameco sat on our hands because the various spreadsheets just did not make any financial sense at $50/lb.  And we were ultimately proven correct.

This ends the article by Doug Beattie, and I hope you will find this article interesting and useful, and will have further interest in my upcoming articles on mining. To never miss a thing, please subscribe to my free newsletter, in order to get an email notice of my new articles soon after they are published.

The author is not a registered investment advisor, and has no position in any stock mentioned. The author has no knowledge of current positions of Doug Beattie. All facts are to be checked by the reader. For more information go to the relevant company websites, and read the company profiles and  official documents on www.sedar.com, also for important risk disclosures. This article is provided for information purposes only, and is not intended to be investment advice of any kind, and all readers are encouraged to do their own due diligence, and talk to their own licensed investment advisors prior to making any investment decisions.