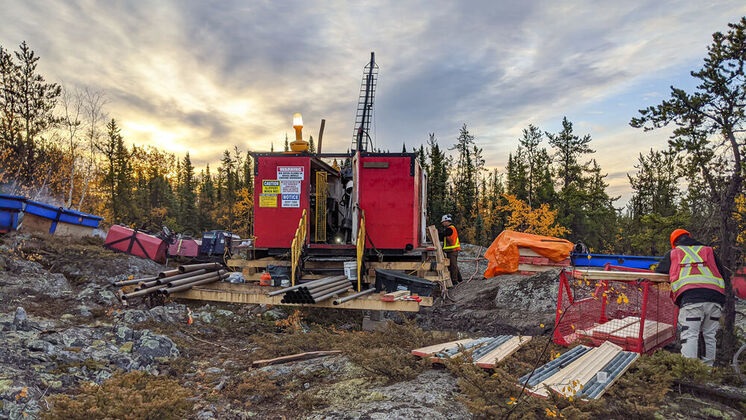 While Ukraine has been completely invaded by Russia further disturbing supply/demand chains around the world, which already see commodity prices soaring and consequently increasing inflation to levels not seen in decades, precious metals, and more specifically gold, are doing well with gold hovering at US$1,915/oz. For Gold Terra Resource (TSXV:YGT)(OTCQX:YGTFF) (FRA:TXO) it’s still business as usual, operating far away in Canada, as it is currently drilling with 4 rigs at their Yellowknife City Gold Project, intersecting (visible) gold and results coming in on a regular basis now, and with the closing of an oversubscribed C$5.6M capital raise on February 28, 2022. With this money in the treasury, it is fully funded to complete the ongoing, extensive 30,000m drill program at  the Campbell Shear at depth.

Shortly after taking the reins at Gold Terra, CEO Gerald Panneton didn’t waste much time and announced a bought deal offering shortly afterwards on February 9, 2022. This offering was intended to raise C$5M, and was a combination of charitable flow-through (FT) shares, offered at a price of C$0.30, traditional FT shares offered at a price of C$0.24, and common shares offered at a price of C$0.21, with no warrants. The offering was made by way of a short form prospectus in each of the provinces of Canada (other than Quebec) and the Northwest Territories. Common Shares were offered by way of private placement in the United States. The offering was made through a syndicate of underwriters led by Stifel GMP and included BMO Capital Markets and Beacon Securities, who received a 7% cash commission (C$392K) over total gross proceeds.

The gross proceeds from the sale of the Charitable FT shares and the traditional FT shares will be used for expenditures which qualify as Canadian exploration expenses (CEE) and flow-through mining expenditures both within the meaning of the Income Tax Act (Canada). The net proceeds from the sale of the common shares will be used for working capital and general corporate purposes. It is good to see that over 80% of proceeds goes into the ground at Gold Terra. This money goes a long way, as all-in costs for drilling is C$200/m until 800m depth, and C$250/m for deeper holes, as it requires a stronger drill rig.

According to Panneton, net proceeds attributed to about C$5.1M, and the total cash position is about C$7 M now. This is good enough for completing 30,000m of drilling at both the Campbell Shear south of the Con Mine and the Mispickel target more to the north for the winter program.

The drilling at the Campbell Shear is well underway for quite a while now with 2 rigs, and regarding Mispickel, the company has recently commenced a small 4,000m drill program, with another 2 drill rigs, as winter is the best window. Panneton believes that earlier drilling at this target wasn’t done efficiently, and hopes to find more high-grade relatively near surface over there, which could add easy ounces to the 1.2Moz Crestaurum/Sam Otto open pit concept he has in mind. The latest results certainly indicate he is on to something of interest, as the first partial assays of hole GTWL22-002 coming back reported 4m @ 19g/t Au from only 20m depth, including 1m @ 73.9g/t Au. 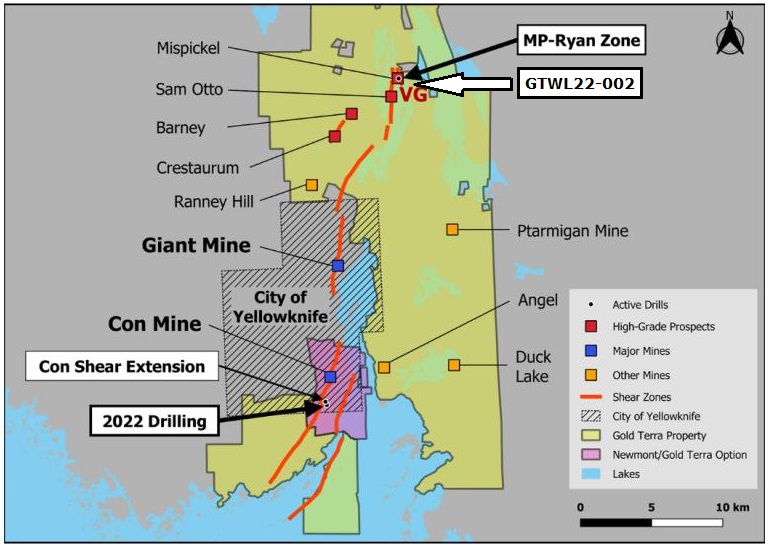 When looking at Mispickel drilling in more detail, Gold Terra is doing a small 4,000-metre winter drill program at the new high-grade MP-Ryan zone 200 metres north of the main Mispickel area. If successful, this program could eventually be expanded to 6,000m. Drilling is targeting high-grade trends with the objective of expanding known high-grade mineralization which is open in all directions and identifying new similar zones. To date, 13 holes covering 4611 metres have been drilled with approximately 3198 samples taken, indicating a sheared vertical gold structure with a strike length of 400m. Visible gold (VG) has been reported in 10 out of the 13 holes and assays are pending for all holes. The collars and trajectories can be seen on the following map of Mispickel: 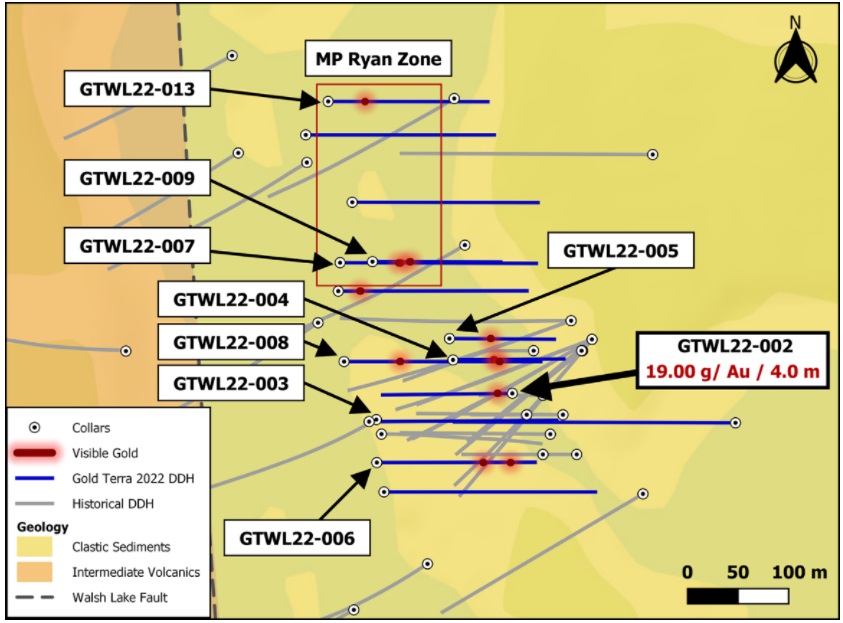 As can be seen, the orientation of the current drill holes is strictly east-west, as opposed to the more variable historical drilling. Since Panneton indicated that he had a different view on the strategy, I wondered about the thinking behind this. According to Panneton, this was done because winter drilling in Canada allowed them to better drill from the proper azimuth or direction to intersect the mineralized target at the best angle. Also, as winter allowed them to drill from a proper set up, Gold Terra could cover ground more efficiently.

An example of visible gold specs can be seen below: 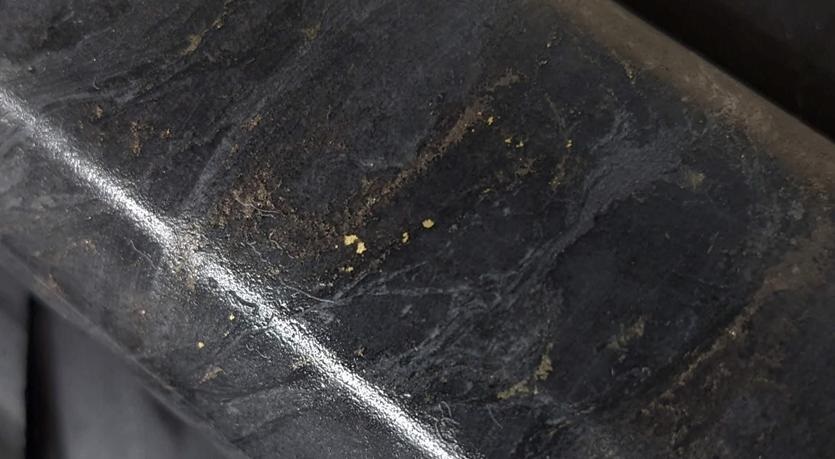 It isn’t easy to attach certain gold values to visible gold images, but in my view it is very well possible to potentially have over 20-30 g/t  Au values here. 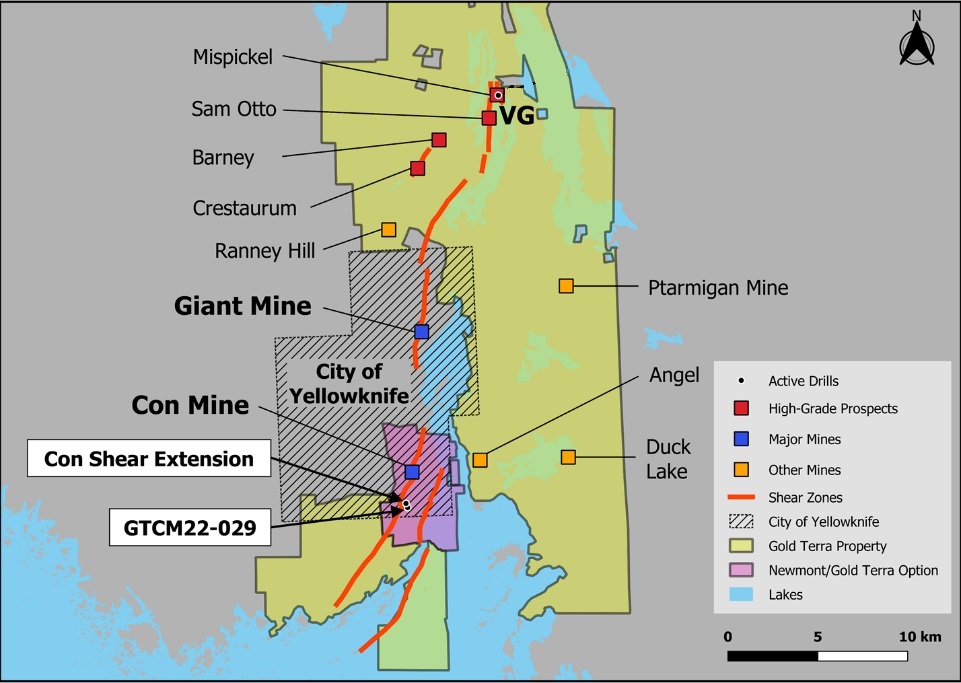 The results of 5 drill holes with 4 of them aimed at the Yellorex target (GTCM21-023 to 026) were reported in the last news release (March 15, 2022), and one (GTCM22-029) being aimed at the aforementioned deep Campbell Shear target hasn’t completed drilling yet. The drill collar locations can be seen here: 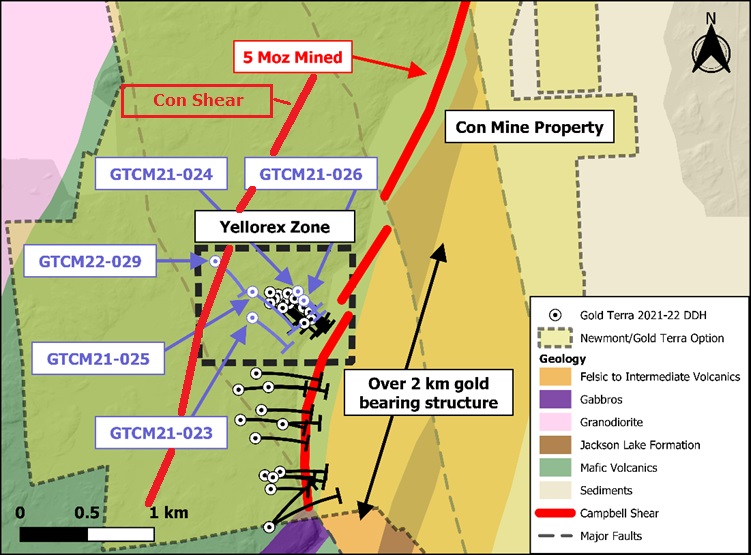 The first four holes 023, 024, 025 and 026 were infill drilling, but also testing the outside boundaries of the Yellorex zone (also part of the Campbell Shear), and all except 023 hit some gold, although not spectacular high grades as the typical smokey quartz and strong alterations were missing. The table with full results can be observed here:

Hole 23, the deepest one so far in 2021 program, was aiming at the zone in the interpreted down plunge. The results were positive in itself as the Campbell Shear was intersected although without economic mineralization, now it is just a matter of adding more holes in the area. I wasn’t really surprised by 024 and 025 as other holes in the vicinity already indicated limited mineralized potential. I viewed 026 as a bit of an infill disappointment though as nearby holes 022 and 003 were much better: 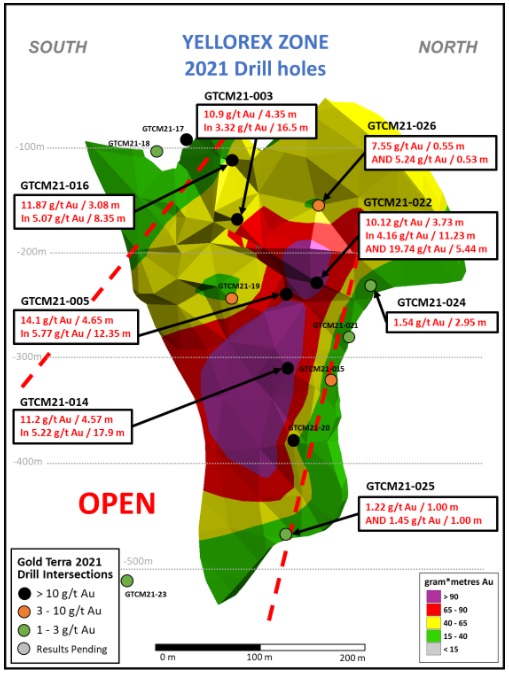 But keep in mind, the big prize on the Campbell Shear is anticipated at depth, and this is where hole 029 is targeted. Panneton thought it would be useful to include the top part of the Con Shear, as near surface ounces are always cheaper to mine than deep underground ounces, a bonus so to say. As only the first 50m of the hole were assayed, the result was nice with 4.55m @ 3.61g/t Au from 37m (including 0.75m @ 15.75g/t Au), and the drill is underway now to 1000m depth, aiming at the Campbell Shear at depth: 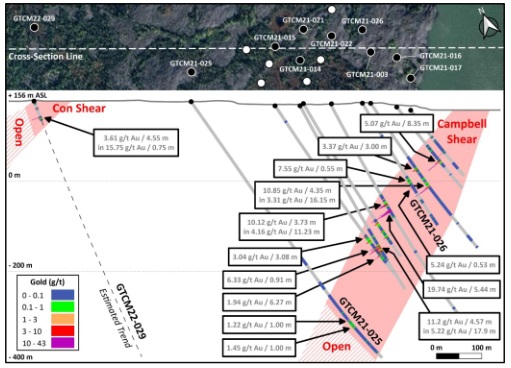 For now the plan is to follow the mineralization at the Campbell Shear down plunge, and over the next 24 months the strategy is to increase the current extent of drilling mainly south of the original Con Mine below depths of 1,000 metres. As a reminder, see the long section below, representing the Con Mine, Yellorex and exploration targets, with the black stars indicating first drill targets, the red ones following up on this:

Management is intending to drill up to about 40,000m this year, with the objective of delineating at least a 1.0Moz high grade gold resource at the Campbell Shear at the end of 2022, and eventually a minimum of 1.5Moz high-grade gold the year after, south of the Con Mine. One more powerful rig is targeting the Campbell Shear at 1,000m depth at a 200m spacing. The second standard rig is allocated to test the Campbell Shear north of Yellorex, until a depth of 800m. The current cash position of about C$7 M would cover about 30,000m of drilling. Subject to its success, the company could be looking at raising more money for more drilling.

Also keep in mind that there is a historic resource remaining at the Con Mine of 651koz @ 10.2g/t Au located below 1000m depth, and according to Panneton there could be about 1 Moz Au down there. It will probably take at least 10-20% verification drilling to convert this into a NI43-101 compliant resource, and this probably has to be done from surface as it is too early to start dewatering the Con Mine. According to Panneton, it is too early for dewatering and going underground, until a resource is reached to support underground drilling.

This is exactly what I hoped for when Panneton took over as CEO, raising another C$5.6M as fast as he could, so drilling at the Campbell Shear could be increased in 2022, with a target of 30,000m, even adding some Mispickel drilling to it, which already returned lots of visible gold and a first, pretty economic assay result. Yellorex drilling seems to have hit its boundaries, but the company is awaiting results of deep holes, and as Panneton and myself are anticipating that the big prize might be located right there, I’m very curious about the outcome. And remember, this exploration of the Campbell Shear is being backstopped by a solid, likely economic 1.2Moz NI43-101 resource but also a 0.65Moz historic resource at depth, with pretty good data available on it. 2022 could be an important year for Gold Terra.

The author is not a registered investment advisor, and currently has a long position in this stock. Gold Terra Resource is a sponsoring company. All facts are to be checked by the reader. For more information go to www.goldterracorp.com and read the company’s profile and official documents on www.sedar.com, also for important risk disclosures. This article is provided for information purposes only, and is not intended to be investment advice of any kind, and all readers are encouraged to do their own due diligence, and talk to their own licensed investment advisors prior to making any investment decisions.