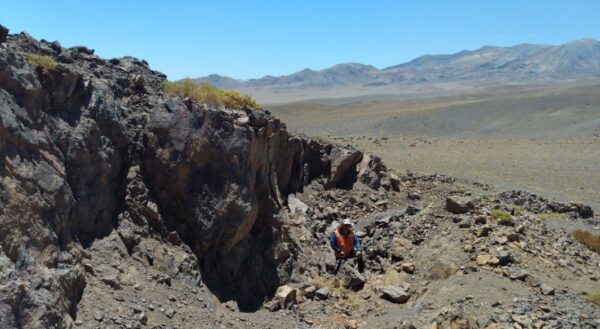 After almost two months of exploration at the Esperanza property at the Flecha de Oro project in Argentina, results are starting to come in for Golden Arrow Resources (GRG.V, GARWF.US, G6A.FSE). The ongoing trenching program is currently in Phase I, and focused on a nine square kilometre area where numerous gold-bearing quartz veins have been identified at surface. There were several interesting and economic intercepts reported, which incentivizes management to continue searching for the heart of the mineralized system.

The Flecha de Oro project includes the La Esperanza, Puzzle and Maquinchao properties, and the company has been trenching at the Puzzle property last December and January, and also trenching since March at La Esperanza. The trenching program of Puzzle commenced on December 7, 2020, and was planned to include 18 trenches totaling up to 2,500 metres, excavated across a vein corridor along 6.2 kilometres of strike length, to delineate targets for a potential 2021 drilling program. The locations of the first ten trenches can be seen on the following map:

Results from these first 10 trenches identified gold in multiple samples over significant widths in several trenches, but unfortunately at grades below the targeted thresholds. Besides this, VP Exploration Brian McEwen stated in my last update on the company that sampling at Puzzle brought a lot of surprises they needed to figure out. I asked VP Exploration Brian McEwen if not reaching the thresholds was the cause of not completing the other 8 planned trenches or maybe the discussed surprises (what were they?) played a role as well, if they were planning on doing more work on Puzzle in the near future, and what the targeted thresholds actually were. He answered that grades and widths recently found at La Esperanza are more in line with what the Company is looking for, so for now, they will be focusing there, with no plans for Puzzle in the near future.

Since Puzzle didn’t return the desired results, McEwen decided to prioritize Esperanza for ongoing exploration. This property hosts multiple vein corridors defined by outcropping quartz veins, boulders and quartz float (quartz float are discrete pieces of quartz vein at surface, likely from closer to the source than a boulder).

Since the commencement of trenching at Esperanza on March 1st, 2021, Golden Arrow has completed 20 trenches totaling 1,693 metres across surface quartz veins and sheeted veinlets that range from a few centimeters to two metres in width. Assays have been received for 10 of these trenches. An additional fifteen trenches are underway, and the Phase I program is expected to continue through most of May.

A summary of the results from the first ten trenches is shown in the table below, with the highlights marked in green:

These results were somewhat below my expectations considering the surface sampling results from 2019 and 2020, with the following highlights:

The three mentioned highlights not proximal to one of the 10 completed trenches were sampled from a different area. According to management, the program is not finished, and later trenches are/will be in other areas, including near to the 24g/t sample mentioned above. The other two highlights mentioned were base metal focused and may not be targeted as such.

Despite the differences, McEwen is positive, as he commented:

“We have seen from our previous surface sampling that there is widespread gold in the system at Esperanza, so we are encouraged to find some broader intervals in the near-surface that will help us vector into the heart of the system.”

I wondered what exactly would cause improved vectoring after the successful sampling program from 2019-2020. He stated that there are a lot of veins in the area, so the results will indicate which ones warrant a closer look, including, potentially, drilling. I also wanted to know what’s next after completing the trenching program this month, when for example drilling can be expected, a potential indication of how many meters. According to McEwen, this will be determined once the trenching program is complete and the results evaluated.

Besides Flecha de Oro, Golden Arrow is actively exploring two other projects, the Rosales copper project in Chile, and the Tierra Dorada Gold project in Paraguay.

As a reminder, the Rosales Copper project is located on the Margarita Trend, which is a structural trend that continues from the adjacent operating Margarita mine southwest onto the Rosales Project, where mineralized occurrences were sampled and returned high values from five rock chip samples in a target area. The company completed the first pass of sampling in February, and plans to follow up with a trenching program.

In the mean time, the company has awarded a TEM surface geophysical survey, to be commencing this month. According to the news release:

“The goal of the program is to detect and delineate prospective electromagnetic conductor responses, consistent with near-surface copper stockwork mineralization, potentially related to Manto-type mineralized copper systems at depth. The program will be executed in two phases:

This survey is designed to map structures related to mineralization, and once completed, its interpretation will be combined with results from the sampling program in order to delineate targets for trenching and future drilling. As copper is printing 10 year highs now, it would be a good thing to get some solid results asap.

The plan was to move ahead with drilling of shallow holes regardless of the granting of the exploration permits, which allow deeper drilling, but after further review of the initial shallow drilling results and the new targets identified by the IP geophysical survey, it was concluded it was better to wait for deeper drilling. The permits were delayed by COVID-19 outbreaks, and in the mean time the company commenced a detailed soil sampling program, besides ongoing mapping, trenching and surface sampling.

Financials: as per the last financials (December 2020) the company owns 675,580k shares of SSR Mining (SSRM.TO), this equity being worth C$13.18M at the moment (May 2, 2021, share price C$19.51) as well as C$6.5M in cash. As such it is clearly fully funded for upcoming exploration programs for at least the next two years. Keep in mind the current market cap is C$19.78M, which is almost exactly the value of the SSR shares and cash, which is very rare for explorers, and thus assigning almost no value to the projects.

The first trenching results from the Esperanza target at the Flecha de Oro project in Argentina weren’t spectacular, but decent enough to warrant follow up exploration.  The company is aiming at drilling at not only Esperanza, but also their copper project Rosales in Chile, and their other gold project Tierra Dorada in Paraguay before year end. For Rosales, a full exploration permit has been granted in April, and management is busy planning geophysical surveys. The permit for Tierra Dorada has been delayed because of another COVID-19 outbreak, so the company has to wait longer before drilling can start, and continues with surface exploration for the time being. So in general progress has been slightly slower than planned, and the first stage exploration results aren’t directly a homerun, but keep in mind there hasn’t been much drilling yet on all three properties, and as drilling is by far the best indicator of mineralization and often isn’t directly linked to reconnaissance exploration results, Golden Arrow still has sufficient opportunities to hopefully surprise the markets before year-end.

The author is not a registered investment advisor, currently has a long position in this stock, and Golden Arrow Resources is a sponsoring company. All facts are to be checked by the reader. For more information go to www.goldenarrowresources.com and read the company’s profile and  official documents on www.sedar.com, also for important risk disclosures. This article is provided for information purposes only, and is not intended to be investment advice of any kind, and all readers are encouraged to do their own due diligence, and talk to their own licensed investment advisors prior to making any investment decisions.