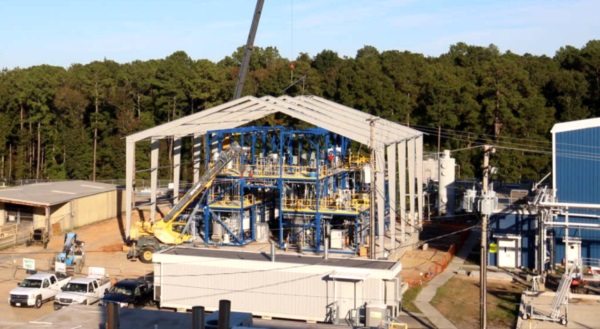 After Standard Lithium (TSXV: SLL) (OTCQX: STLHF) (FRA: S5L) managed to arrange a C$5M (US$3.75M) convertible loan and guarantee agreement with Lanxess on October 30, 2019, management hasn’t been sitting on its hands. On February 26, 2020, the company announced that an ongoing capital raise, intended to raise C$6M, was closed at no less then C$12.1M. I found this to be very impressive as sentiment for lithium developers has recovered slightly on the back of Tesla’s unexpected positive results and following runup of the share price of the car and battery manufacturer, but is still neutral to negative. The proceedings will be used for the ongoing development of the mentioned demonstration plant, which is capital intensive.

The original announcement on January 30, 2020 mentioned a non-brokered private placement of up to 8M special warrants, at a price of C$0.75 per special warrant, for gross proceeds of up to C$6M. On a sidenote: the financing being non-brokered is already impressive in itself, as Standard Lithium didn’t have to tap the brokers who usually dominate these financings. Each special warrant or unit consisted of one common share and a half warrant. Each warrant entitled the holder to acquire an additional common share at a price of C$1.00 per share for a period of twenty-four months, subject to an accelerated expiry if the closing price of the company’s shares is greater than C$1.50 per share for a period of 15 consecutive trading days. Commodity Capital AG, a strategic investor in the company for a long time, together with management and Board of Directors signed up for a large portion of this round.

As the share price at the time was C$0.86, there was an average discount, but nowhere near the maximum allowed discount of 20%. Investors sold off probably in order to raise cash so they could participate and get that half warrant, but the stock recovered quickly:

However, at February 4, 2020 management announced an increase of the financing to C$9M, consisting of 12M special warrants, due to strong demand. This wasn’t it, as despite the Corona virus outbreak the company released news on February 21, 2020, stating that the financing was closed at a very impressive C$12.1M, for 16.14M special warrants. From the reported highlights I especially liked the personal investments of the CEO Robert Mintak and the COO Andy Robinson, who together with director Alvaro invested another meaningful C$800k besides their already sizable positions:

In connection with completion of the private placement, the company has paid limited finders fees of C$119,268, and issued 452,025 warrants, to certain arms-length parties who assisted in introducing subscribers to the company. As usual finders fees are based on 6-7% of the amount raised, this was obviously meant only for a small part of the total raise of C$12.1M. Most of it was brought in by the strategic investors, which together with management and BoD represented a big vote of confidence. The cash will be used to complete the commissioning of the LiSTR direct lithium extraction demonstration plant in southern Arkansas, as well as to maintain existing property interests and for general working capital purposes.

Following the news releases about this impressive financing news, I had some questions, and contacted CEO Robert Mintak to have a small interview.

The Critical Investor (TCI): Can you say a bit more about the investors that took part in this round?

Robert Mintak (RM): These included new and existing European funds, and a number of local Arkansas investors who have been active and following our development over the past 18 months.

TCI: Was Lanxess taking part in this financing, if you can disclose?

TCI: Is this all the cash you need for commissioning, PFS and optimization?

RM: This will be subject to operational success of the demo plant. We are confident that this will fund us through the proof of concept requirements for JV to be formally executed.

TCI: How long will this cash last, and do you foresee more rounds, and if so for what? RM: This funding round should allow us to push through several significant milestones, including a final investment decision in late Q2, that we believe will be inflection points for a revaluation of our share price over the coming 2 quarters.

TCI: What about the SiFT plant, this was scheduled to be constructed in Q4 2019?

RM: Construction is underway on the SiFT pilot plant. We anticipate delivery to the Arkansas site in early to Mid Q2.

TCI: When is the PFS expected, try to be as specific as possible?

RM: A significant amount of data for the PFS is in hand. We are targeting mid to late Q2 for the PFS to be finalized. TCI: Anything else you want to add?

RM: There has been a lot of recent news surrounding Silicon Valley investment in a startup direct lithium extraction technology which is exciting news for the entire space. The attention it is bringing to the industry reflects the transformation that direct extraction offers to an industry that is strangely not known for embracing innovation. I would like to highlight that Standard Lithium is several years ahead of anyone in the direct extraction space at this time. The successful operation of our “LiSTR” industrial scale direct extraction demonstration plant is one the final steps to cross before a final investment decision on the commercial built is made at our Arkansas project. A project that is already flowing billions of gallons of brine annually. This is a project that, if successful, will be a global showcase for direct extraction and disciplined project execution.

Together with the C$5M convertible loan raised 4 months ago, Standard has raised over C$17M for this period, and this is apart from amazing also likely enough to take the project through PFS and a Lanxess final investment decision, of course depending on the success of the LiSTR demonstration plant.

As a reminder: this demonstration plant is roughly designed at 1/60 scale of the target production capacity of the first phase of commercial production, and should provide sufficient testing data this quarter for a planned upcoming Pre-Feasibility Study (PFS) in Q2 2020 as mentioned, and if the testing is successful it should be straight forward to scale to commercial production after the investment decision would have been made by Lanxess. It is important to note that with direct extraction the commercial construction can be phased unlike the “all in” massive earth moving exercise of evaporation ponds. The demonstration plant is based on Standard Lithium’s proprietary LiSTR technology, that uses a solid sorbent material to selectively extract lithium from Lanxess’ tailbrine. The environmentally friendly process eliminates the use of evaporation ponds, reduces processing time from months to hours and greatly increases the effective recovery of lithium.

The economics indicate a pretty robust lithium project, at a capex of US$437M an operation can be constructed with an after-tax NPV8 of US$989M and an after-tax IRR of 36%, based on an average long term LCE price of US$13,550/t. I already viewed this base case price as high in the recent past, and the situation for LCE pricing has deteriorated further since then. Fastmarkets quotes an LCE price of US$8,750/t in this useful article of Matt Bohlsen on Seekingalpha, Benchmark Mineral Intelligence mentions US$7,922/t LCE, so the estimated average would hover at US$8,400/t at this time. The trend is still following a downward path, as can be seen here in this chart from Fastmarkets:

Despite Tesla breaking record after record on the markets (and giving a decent percentage back due to the Corona virus anxiety these days), lithium pricing appears to be negative, on the back of Chinese GDP growth issues which drags down almost all commodities. Therefore I reworked the lithium sensitivity, where three scenarios are presented, the 20.9kt LCE pa (per annum) base case, and the hypothetical 30kt LCE pa expansion scenarios as I calculated them in my first article on the company:

An US$8,400/t LCE price would still generate a hypothetical NPV8 of US$183-275M, and a hypothetical post-tax IRR of 14-16%, which would render the project not economic, as lithium projects usually need an IRR of at least 25%. These figures are based on 100% project ownership economics, and 100% equity financed which is standard for economic studies or hypothetical estimates like this. In the news release dated November 12, 2018, Lanxess is committed to provide project finance to the JV when testing and the PFS are successful for them, and Standard will probably be an estimated 30% JV partner (according to company documents filed on Sedar).

At a current market cap of C$70,99M, the JV share of the NPV8 for Standard is at the moment hovering at the same level, depending on which firm you ask about the current LCE price. So there doesn’t seem to be much upside. However, I do believe Lanxess hasn’t been committing C$5M for no reason. As it is set to fund full capex, I do believe it is cheaper for them to buy Standard out at a low point in NPV valuation, and consolidate the entire project. The recent C$12.1M raise points towards the same direction, as it was a unusually large amount for a lithium junior/developer. I believe something could be going on behind the scenes, and I usually don’t base an investment thesis on a buy-out scenario, but this time it could be different.

With this fresh non-brokered raise of C$12.1M closed now, another strong vote of confidence in the Lanxess project of Standard was issued recently. I see a take-over as inevitable now, when this kind of money is invested in a lithium junior, an unloved subsector of mining at the moment. Standard management doesn’t seem to be fazed one second, and is on the road raising cash like it is 2011 or 2016 again, it is almost unbelievable as about any non-gold company has trouble raising over a few million. Sitting at a full treasury, Standard is cashed up to complete most if not all necessary testing at the LiSTR demonstration plant, complete the PFS and await a construction decision from Lanxess. I am curious, too.

The author is not a registered investment advisor, and currently has a long position in this stock. Standard Lithium is a sponsoring company. All facts are to be checked by the reader. For more information go to www.standardlithium.com and read the company’s profile and official documents on www.sedar.com, also for important risk disclosures. This article is provided for information purposes only, and is not intended to be investment advice of any kind, and all readers are encouraged to do their own due diligence, and talk to their own licensed investment advisors prior to making any investment decisions.