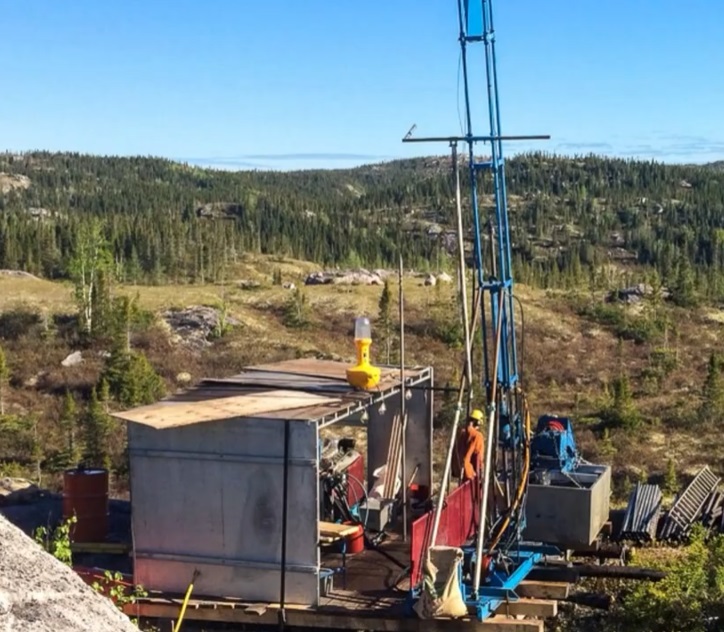 Amidst rising inflation to levels not seen since the seventies, a Russia-Ukraïne conflict which now focuses on the Donbass and southern port cities, but seems contained for now, although it causes disruptions for commodity markets, and a Fed not sure what to do with interest rates, Vior Inc. (TSXV:VIO)(FRA:VL51) keeps focused on exploration, as it recently received the results of the completed Phase I drill program of their flagship Belleterre Gold project in Quebec. Management was happy with the results, highlighted by one bonanza grade intercept of 0.5m @ 55.2 g/t Au. In addition, the first holes of a 4,000m Phase II drill campaign were completed as well, with the cores looking encouraging to management, targeting the validation of high-grade feeder structures surrounding the historic Belleterre gold mine.

At April 6, 2022, Vior announced the long awaited results from the Phase I drill program at Belleterre. Five holes were completed, for 3,857m of drilling. The objective of the Phase I program was to test the continuity of multiple gold-bearing veins at depth and better define the geological framework of the historic Belleterre mine trend, which has seen limited historic drilling below -200 m. 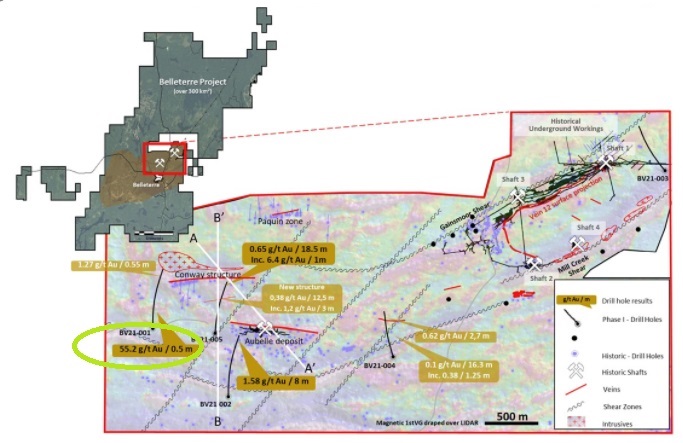 Drilling successfully intersected the down-dip projections of multiple historically mineralized vein structures, and other previously unrecognized gold-bearing quartz veins and structures. The full drill results can be observed in the table below: 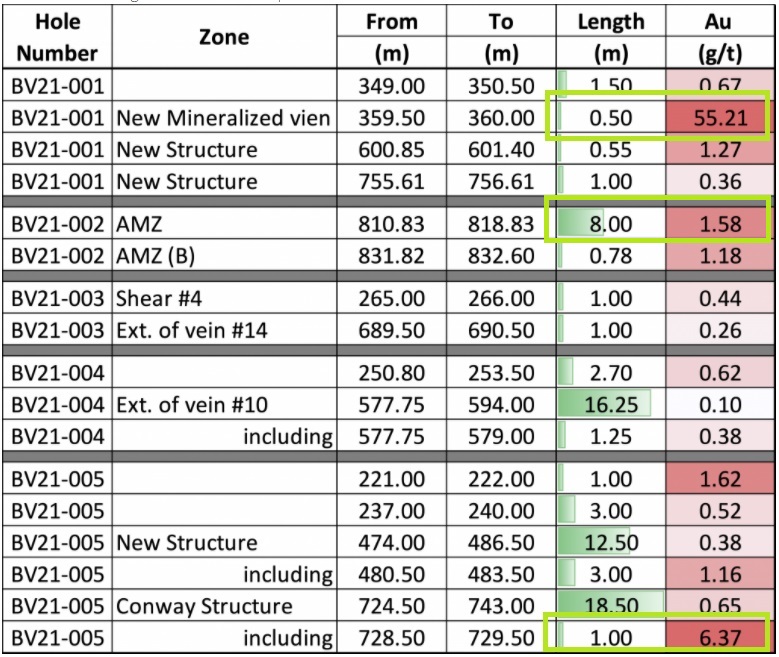 The highlight, and also the only economic drill result, is hole BV21-001, with 0.5m @55.21g/t Au. Although the 8.0m @ 1.58 g/t Au intercept didn’t look economic, according to VP Exploration Laurent Eustache it not only indicates width at depth, but could also very possibly vector in on mineralization with width nearby grading much higher, according to historic data.

Please note that the holes were drilled under a 50-54 degree dip so the actual depth doesn’t surpass 500m at most. 3 out of 5 holes were targeting the Conway structure and the Aubelle deposit, the trajectories of the sections A-A’ and B-B’ can be seen on this zoomed-in map: 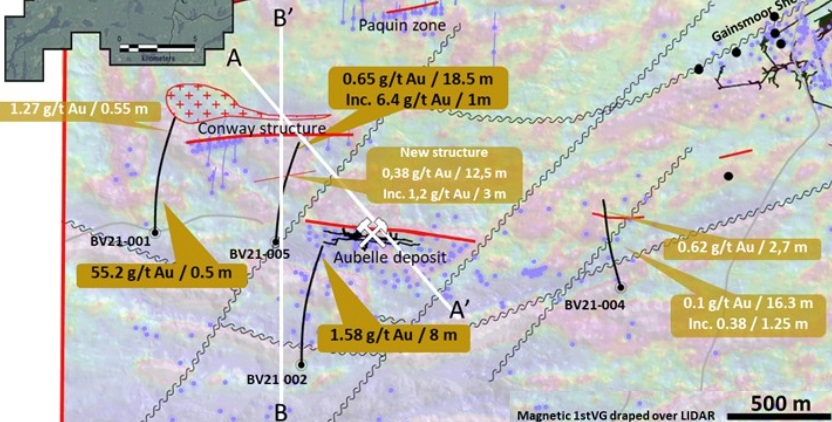 The idea was to target extensions of both mineralized structures at depth, as can be seen below in the B-B’ section: 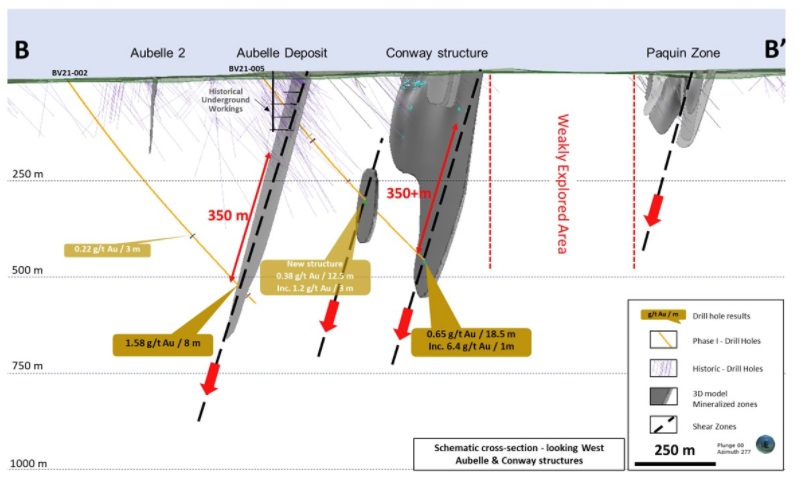 Although the intersections weren’t spectacular or economic (as a basic threshold, results for vein systems should have a cut-off of at least 4 g/t Au and a width of at least 2m in order to be economic at current gold prices, so g*m of at least 8 at current gold prices), they implied continuity of mineralization, and seem to provide sufficient vectors for management to be encouraged by what they drilled, as CEO Mark Fedosiewich commented:

“Five core holes were drilled in Vior’s Phase I maiden drill program, four of them returned gold intercepts including two narrow high-grade gold and three thick intercepts of lower-grade gold-bearing quartz veins. Our team is very encouraged by the strength of the gold system, which not only shows exceptional continuity over 350 meters down-dip of the historic Aubelle Mineralized Zone (AMZ) and the Conway vein, but also suggests these zones are increasing in thickness with depth. This initial drill program was a big step towards de-risking the Belleterre gold project, and the structural data obtained from this program will be critical in helping our team vector towards higher-grade vein shoots.”

I wondered what kind of structural data could lead to higher grade vein shoots in this case. VP Ex Laurent Eustache explained this as follows: “The results from the Phase I drill program demonstrated some strong and well distributed gold structures at depth in the continuity of the historic high-grade quartz veins at surface. We have observed wider gold intercepts and are very encouraged by the presence of new mineralized zones between Aubelle and Conway. Evidence of down-dip continuity over 350m, new structures in-between, wider gold intercepts and the validation that the high-grade mineralization continues at depth all provide for a strong opportunity for more aggressive exploration. It is an important milestone in the exploration de-risking process and now opens up the untapped exploration potential in the west part of the historic mining trend. These Archean gold deposits are not homogeneous over an entire structure and commonly develop high-grade gold shoots along structural lineament, and this is exactly where our technical team is now concentrating on.”

As most of the targeting seems to be at considerable depths, I also asked if directional drilling could be helpful to limit the drilled meters and costs. Eustache answered that there are still many targets close to the surface, but for targets at depth, there are various strategies that can be used to mitigate the drilling costs, such as directional drilling and the use of wedges. When a drill intersects good looking gold mineralization, we can avoid re-drilling the beginning of a hole by deviating it from the mother hole with another leg, in order to investigate potential mineralization continuity in the surroundings.

Besides these first results coming from the Phase I program, Vior has already completed several drill holes from the 4,000m Phase II program as mentioned. This program targets confirmation and step-out drilling along the projected extensions of multiple past producing gold bearing vein structures of the historic Belleterre gold mine. After visual inspection of the core, several vein structures appear to be intersected, and apparently the visuals justified several samples being rushed to the assay labs, so it wouldn’t surprise me if some visual gold was observed. Visual gold often generates grades above 10 g/t so I’m curious what results will be reported. Management anticipates to have the first of these rushed assays back in 3-4 weeks. I wondered if these assays were part of the 4 holes targeting the 12W vein extension at depth, and CEO Fedosiewich answered: “We have increased the number of holes drilled in the 12W vein extension from 4 to 6 because of the very encouraging vein structures that we encountered, and have sent some rush samples from from 3 of these holes to date.” This sounds interesting of course, let’s wait and see what will return from the labs.

The Phase II drill program consists of ten high-priority drill targets totaling over 4,000 meters and is focused on the former Belleterre mine concessions. The ten holes are further specified below:

Figure 2 can be seen here, showing the Phase II drill targets and their context: 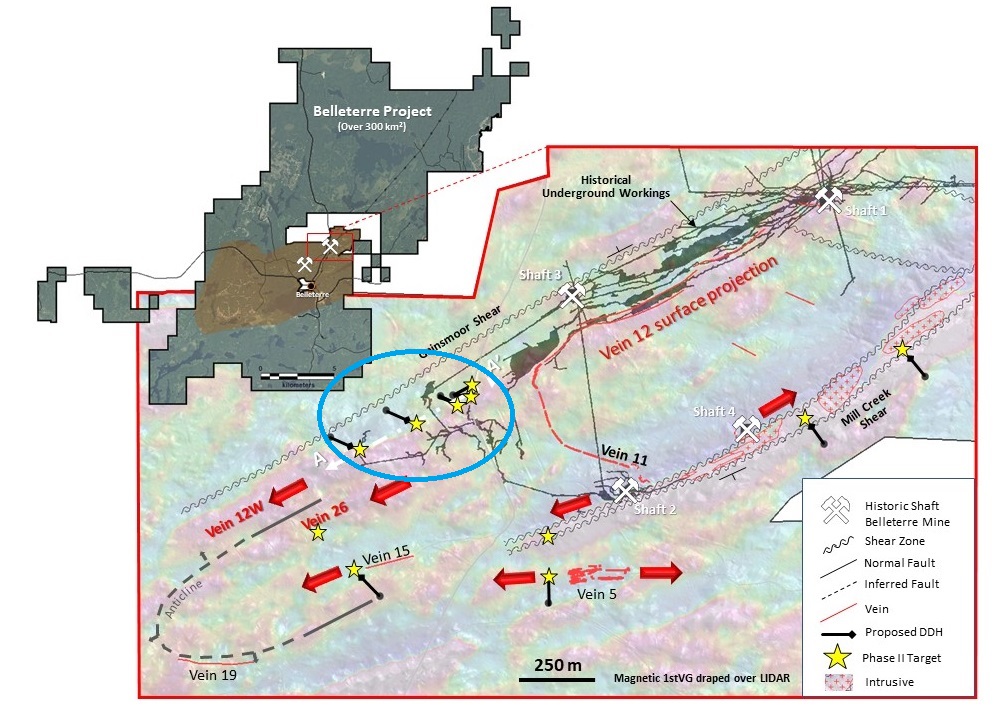 In my view, the six holes testing the Vein 12W strike to depth could be the most meaningful, as most of the mined out mineralization was produced from this very vein in the past, and likely with gold left behind in the vein shoot. Lots of historical drilling intercepted short, high grade mineralization, with grades like 20.6g/t Au, 58.1g/t Au and 65.8g/t Au, mostly within a 100m below the deepest mined out level, as shown in Figure 3 below, indicating historical high grade mineralization in an updated 3D model: 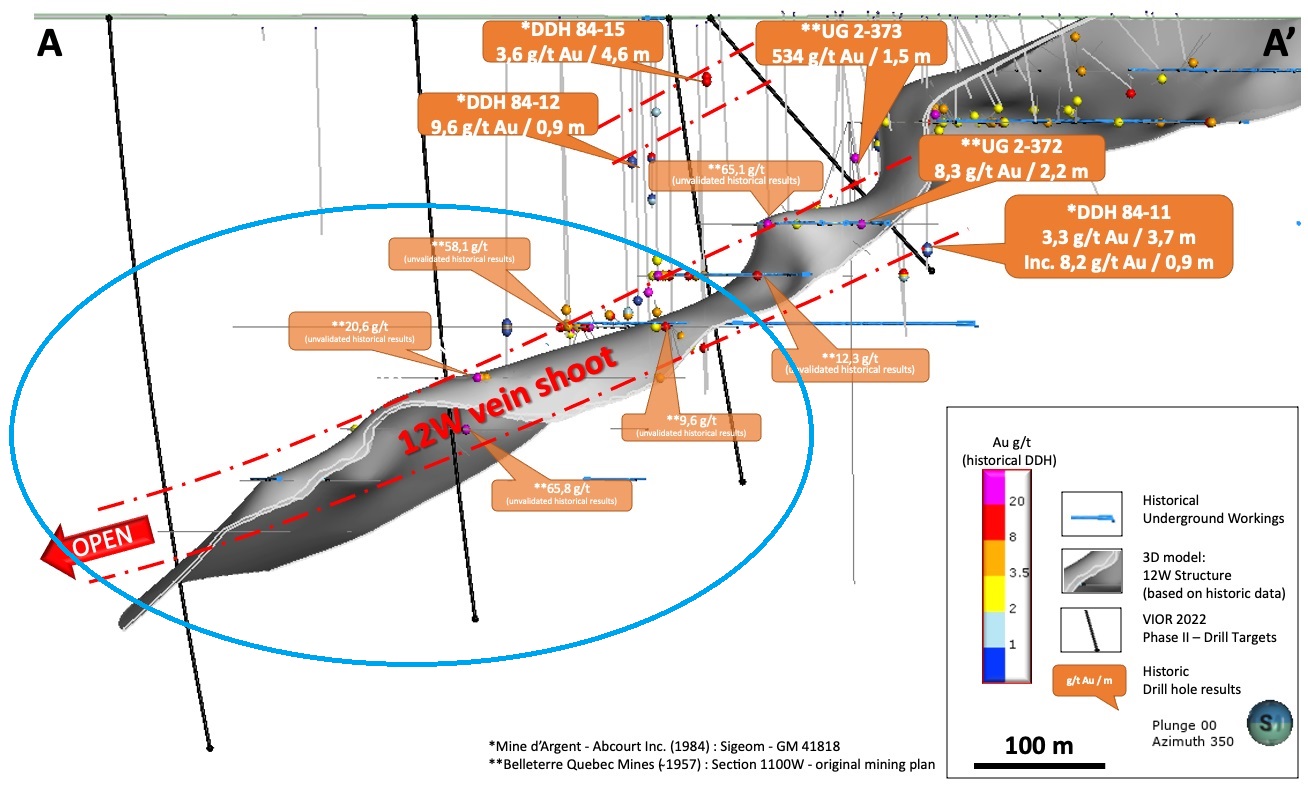 Previous drilling did not exceed 250 meters, and as the Belleterre Mine has been mined to a depth of 750m, and gold mineralization in the Greenstone Belt in Quebec often continues to depths much larger than this, management got excited by the low level of exploration at depth on the historic mine trend, as continuing mineralization often provides a high chance at exploration success. Therefore this could very well be one of the most effective and least risky exploration strategies out there, which is exactly what you need being a cash-burning junior like Vior. I like this sound strategy very much, and let’s see what Belleterre might have in store at depth.

Regarding their second priority Skyfall project, Eustache had this to say: “We are still working on the geophysical data reprocessing and are not yet ready to elaborate on our advancements. We will return to the field late spring/summer in order to gradually advance it, and will update the market with our more detailed field strategy at that time. This has everything to do with our current focus, as we will be stretched with all of our personnel at Belleterre during the ongoing exploration program over there.”

The current cash position of Vior sits at approx. C$2.8M, and the company is cashed up at the moment to complete the current Phase II 4,000m drill program, and a summer field program at Belleterre. A big advantage for Vior is the very low all-in cost of diamond drilling in the lower Abitibi region of Quebec, coming in at approx. C$160/m, but in addition there are also significant tax incentives for flow through capital raises dedicated to exploration in Quebec, enabling the company to raise at a significant premium, and hereby limiting dilution. Management is also already contemplating a Phase III drill program for Belleterre, which will need additional funding, somewhere in the near future.

The first batch of drill results wasn’t the most impressive, but it confirmed the validity of the strategy Vior management is pursuing: seeking gold mineralization at depth below an existing (in this case mined out) deposit, as is often the case with Greenstone Belt projects in the Abitibi in Quebec. Even the lower grade intercepts provided valuable vectoring information for Vior’s geologists to establish sufficient continuation of mineralization of veins at depth. The ongoing Phase II program, focusing on the area directly adjacent to the historic mine, predominantly producing from Vein 12W at the time, already provided the company with such visually interesting cores that they decided to rush the assays. With the results expected back from the labs within 3-4 weeks, it could be an interesting summer for Vior. Stay tuned!

There is a possibility to meet with Mark Fedosiewich and Laurent Eustache in person, as Vior will have booth #404 at the upcoming VRIC.

The author is not a registered investment advisor, and currently has a long position in this stock. Vior Inc. is a sponsoring company. All facts are to be checked by the reader. For more information go to www.vior.ca and read the company’s profile and official documents on www.sedar.com, also for important risk disclosures. This article is provided for information purposes only, and is not intended to be investment advice of any kind, and all readers are encouraged to do their own due diligence, and talk to their own licensed investment advisors prior to making any investment decisions.