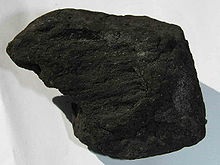 Coal (from the Old English term col, which has meant "mineral of fossilized carbon" since the 13th century. is a combustible black or brownish-black sedimentary rock usually occurring in rock strata in layers or veins called coal beds or coal seams. The harder forms, such as anthracite coal, can be regarded as metamorphic rock because of later exposure to elevated temperature and pressure.