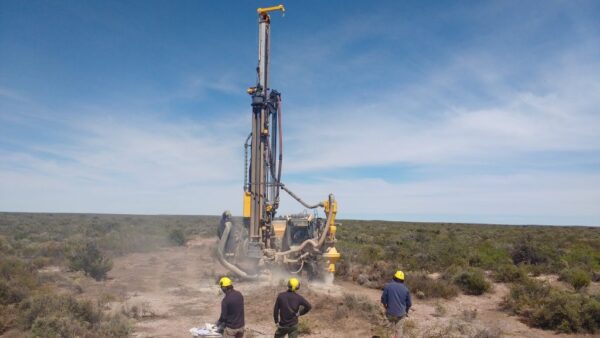 As uranium sentiment for stocks remains strong, Blue Sky Uranium (TSXV: BSK; US-OTC: BKUCF) is looking to seize the moment, and continues to advance their flagship Amarillo Grande uranium project in Argentina. This strong sentiment puzzles fund managers specialized in uranium stocks, as usually the uranium spot- and contract prices appreciate first, and stocks follow. Despite all mine closures, cut-backs in production and the US reserve bill, uranium prices hardly moved, as is shown on this chart from the Cameco (CCO.TO) website:

Apparently there is a disconnect, and many industry experts forecast an ignition in utilities buying contract again soon, as there are signals: Cameco is restarting Cigar Lake, and Denison Mines had trouble buying U3O8 at the spot market lately. Notwithstanding this, others have doubts about this timing, like analysts from Morgan Stanley and BMO. The only objective reality for now is that the inventory of utilities remains a very opaque situation. Notwithstanding this, Morgan Stanley and BMO both forecast US$50/lb U3O8 spot price levels by 2024, and probably resulting in even higher contract pricing, which is of course long term bullish for all uranium stocks. It only takes time.

As Blue Sky Uranium is looking to make the best of the current positive sentiment, it raised C$5.46M at the end of January, and this fresh pile of cash allows the company to fast-track their Amarillo Grande uranium-vanadium project in Argentina towards a Preliminary Feasibility Study (PFS). An increased and further delineated resource, and improved metallurgical testwork are part of this, and could improve already robust economics further.

As can be seen in the chart below, Blue Sky Uranium performed really well since the beginning of coverage at the end of January:

The share price even managed to outscore most of the competition the last few days, but it still has lots of catching up to do compared to the sector’s most popular stocks like NexGen Energy (NXE.TO), Uranium Energy (UEC.US) and Energy Fuels (EFR.TO):

It appears that more advanced developers get larger premiums to NPV, so this is the direction Blue Sky management is taking now. An important part of this path is doing detailed metallurgical testwork. On April 6, 2021 the company announced the start of a second phase testwork program, targeting further process design tests for the Ivana deposit. Normally these things are a formality, but in this case Blue Sky Uranium hired Chuck Edwards again (also for the 2019 PEA), in order to achieve the highest possible level of quality. Edwards is a formidable name in the uranium industry, as can be seen in his bio:

“Mr. Edwards is a Professional Engineer with over 50 years of experience in Research and Development, operations, government service, consulting and engineering management. He is now Principal with Extractive Metallurgy Consulting in Saskatoon, Saskatchewan. Chuck specializes in uranium processing for both alkaline and acid leach plants. He was involved in the engineering design of all the current uranium facilities in Saskatchewan's Athabasca Basin, and has worked on uranium projects on five continents. Recently Chuck was a Process Engineering Advisor at the Saskatchewan Research Council. Previously he held positions as Director of Metallurgy at Amec Foster Wheeler, Principal Metallurgist at Cameco Corporation, Regional Coordinator for Mineral Development Agreements for Energy, Mines and Resources Canada, Senior Metallurgist/Process Engineer with Kilborn Western Ltd., and Chief Metallurgist at Eldor Mines, Rabbit Lake, among others.

Chuck has been a Technical Consultant to the International Atomic Energy Agency (IAEA), Vienna, Austria since 1999 and served as President of the Canadian Institute of Mining, Metallurgy and Petroleum (CIM) in 2011-2012. Chuck was awarded the AIME gold medal for Extractive Metallurgy Technology in 1987, the CMP Best Presentation Award in 1997 and 2007, CMP Mineral Processor of the Year in 2001, CIM Distinguished Lecturer in 2003, CIM Fellowship in 2004, CIM Life Member in 2011, and CIM Distinguished Service Medal in 2013.”

To have the former Director of Metallurgy of Amec Foster Wheeler, the best engineering firm in the mining industry before they were taken over by Wood PLC, on board is no small feat, and shows the high standards of management. The testwork will be done at the Saskatchewan Research Council in Saskatoon, Saskatchewan, basically the homeland of uranium as this jurisdiction is the location of the worlds largest (and temporarily closed) McArthur River uranium mine (Cameco), but also significant mines like Cigar Lake and Rabbit Lake (Cameco) can be found here, as well as the Arrow deposit (NexGen Energy), arguably the best undeveloped uranium deposit on the planet.

The test program will use a new composite (up to one tonne) bulk sample, consisting of mineralized material from the Ivana deposit. The parts of the process to be tested are membrane filtration and liming, uranium-vanadium separation by solvent extraction, uranium and vanadium precipitation and uranium/vanadium calcining. As the process isn’t based on acid leaching but also standard alkaline leaching, resulting in an alkaline carbonate, it is anticipated that permitting will be easier.

Some background: uranium is precipitated as uranium peroxide, also known as yellowcake, which is calcined to triuranium octoxide (U3O8), more commonly known as uranium oxide, which is then drummed for shipping to customers.

Vanadium is precipitated as ammonium metavanadate, also known as redcake, which is calcined to vanadium pentoxide (V2O5), which is also drummed for shipping to customers. The testwork program will evaluate the efficiency of the precipitation process for each of uranium and vanadium, the consumption of precipitation reagents, the precise chemistry and flow rate of each process stream, and the purity of the uranium oxide and the vanadium pentoxide products relative to market standards.

Other planned requirements for the upcoming PFS are permitting and project planning, the ramping up of engineering work, and the expansion and infilling of the existing Ivana deposit, already containing a NI43-101 compliant Inferred resource of 22.7M lb U3O8 and 11.5M lb V2O5:

The scheduling for the granting of new exploration permits is not really clear, but management hopes to have these permits granted sometime in Q2 or Q3.The engineering work is planned to start in Q2, and is expected to take around 12 months, and all drilling is expected to be completed around the same time.

For now, the company has commenced a 4,500m reverse circulation (RC) drill program, aimed at identifying new uranium resources near Ivana and throughout the district, focusing on the Ivana Central (IC) and Ivana North (IN) targets, located 10 and 20km north respectively of the Ivana deposit:

The IC and IN targets are interpreted as being located along the same regional redox front as the Ivana Deposit; comparable redox fronts like the giant ones in Kazakhstan commonly host multiple deposits. The company already completed significant exploration efforts, like airborne and ground radiometric surveys, sediment and pit sampling, auger and core diamond drilling, and induced polarization (IP) geophysical surveys. The results indicate a positive geological environment, with high chargeability IP anomalies and uranium-vanadium mineralization observed, including no less than 1.40% U3O8 over 1.10 m in pit samples, which for example can be observed here:

Drill results are expected around the end of April/ beginning of May. Further plans are still being determined. Management has set their goals high, as it aims at expanding the existing resource towards 100M lbs U3O8. This would improve economics substantially, as the 2019 PEA, based on the current 22.7M lbs U3O8 resource, shows a decent but relatively small post-tax NPV8 of US$135.2M, with a robust IRR of 29.3%, at US$50/lb U3O8 and US$15/lb V2O5. I discussed the vanadium price and impact in an earlier article, but in short the currently much lower vanadium price only has a very limited impact on the NPV (about -5%).

Management also plans to look for potential for in-situ recovery (ISR) zones at a larger depth, but no deeper than 150m, in analogy with the Kazakh deposits. The company adjusted their plans into restarting drilling at Anit and Santa Barbara, as when production would start at Ivana, the potential Ivana satellite deposits (20-30km from the current Ivana deposit) could provide feed to the plant first at a later stage, without having to build a new mining plant. After this the Anit and Santa Barbara targets would be explored, but there has been no period determined for this yet.

The treasury currently stands at an estimated C$2M after raising C$5.46M, retiring C$2M in debt and spending money on exploration , and should be sufficient to complete the 4,500m drill program, and begin the PFS.

As Blue Sky Uranium finally could commence drilling in February, and is initiating lots of other PFS work like metallurgical testing after it was cashed up after the C$5.46M non-brokered and oversubscribed private placement at the end of January, it seems the company is able to shift gears now, after a largely inactive 2020 due to well-known conditions worldwide. Since the 2019 PEA already indicated a lowest quartile cost profile, a much larger resource as the company is aiming for will probably vastly improve economics, and could establish Blue Sky Uranium as one of the top conventional uranium juniors in the world.

The author is not a registered investment advisor, and has a long position in this stock. Blue Sky Uranium is a sponsoring company. All facts are to be checked by the reader. For more information go to www.blueskyuranium.com and read the company’s profile and official documents on www.sedar.com, also for important risk disclosures. This article is provided for information purposes only, and is not intended to be investment advice of any kind, and all readers are encouraged to do their own due diligence, and talk to their own licensed investment advisors prior to making any investment decisions.